Rents recovering but not yet back to peaks

Brisbane’s rental market has recovered from the lows of COVID-19, with rents now rising across most suburbs. The latest stats from the Residential Tenancies Authority show apartment rents rose in the March quarter, with median rent for a 2 bed Brisbane apartment now $435 per week, up $10 since the end of 2020.

That’s still down from the $440 we saw a year ago, so the market’s not yet back to its previous highs. Landlords can draw some comfort from the change but it’s not yet time for them to be popping champagne, or for tenants to despair.

International students still gone but not missed (as much) 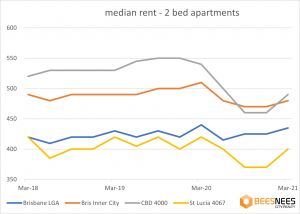 Some of the areas that have rebounded the strongest have been St Lucia and the CBD, where median rents rose 8% and 7% respectively in the first 3 months of this year. They’re both still below their 2019 highs after the absence of international students dented demand. But that’s a big bounce-back and shows the rental market has well and truly shifted gears.

New arrivals from interstate have been obvious at our property managers’ inspections: At one East Brisbane apartment last week 5 of the 7 tenants attending had recently arrived from NSW.

Interestingly there’s also been a revival of interest from locals in recent months, with the relative affordability of those ‘student suburbs’ drawing tenants from surrounding areas. The CBD is now more affordable than Teneriffe for example ($480/week v $490/week) – saving a few dollars and eliminating your morning commute can be reason enough to move.

As always, our property managers are looking for tenants who have a sound track record of looking after their previous rental home and paying their rent on time. The more evidence a tenant can bring to support this, the better their chance of securing the home of their choice.

Brisbane’s house rents led our recovery in the December quarter so they’ve now had 2 quarters of rent rises. The median 3 bedder house rose another $10 to $470/week in the March quarter.

Less rentals to go around as 1st home buyers step up

Our total rental supply (measured by the total number of bonds held by the RTA) has dropped in many Brisbane neighbourhoods. There’s now 191,745 rental homes in Brisbane, down 0.4% (or 803 dwellings) in the March quarter.

This is an unusual shift in our market. Our property managers have witnessed plenty of tenants who have been asked to vacate as their homes have been sold to first home buyers. This trend is noticeable in many inner-city neighbourhoods where young couples are busy buying their first apartments. 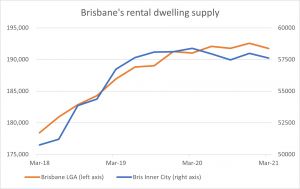 The South Brisbane/West End peninsula, for example, is home to more rental dwellings than any other Brisbane postcode with 12,340 rentals – that doubled from 2015 to 2020 as new apartment towers rose above the skyline. But its supply has shrunk by almost 500 dwellings (479) in the past 12 months.

Our team haven’t witnessed the return of investor buyers as quickly as we expected, so without new supply to replace them rental homes continue to be removed from the market. Some investors have been waiting for solid price growth to be evident, and we know others are cautious of buying property while the government’s proposed changes to tenancy laws threaten to remove many of their rights.

# The RTA stats are considered the ‘definitive’ measure of the market as all bonds need to be lodged with them; these stats record the new bonds lodged each quarter so they’re tracking new tenancies when properties have been offered to the market. We use the 2 bed apartment rents as our ‘headline’ market stats as the RTA don’t collate their data and 2 bed apartments are the most common type of Brisbane rental home

## Brisbane’s most central 9 postcodes (just 24 suburbs) are home to 30% of Brisbane’s rental dwellings; This has risen from 24% in 2015 due to the surge in new city apartments