We get excited about Brisbane’s new bridges! Not just because we love architecture and new infrastructure that improves movement around our inner-city. But we also like to consider how they might connect neighbourhoods, change the lifestyles of locals and impact property values. And we do think there could be price uplifts after completion of the 3 bridges under construction and the other two in planning.

Brisbane’s $550m Green Bridges Program is well underway, with the linking of Kangaroo Point and the CBD’s Edward Street getting underway this year. It’ll be a stylish foot and cycle bridge (see the video flythrough – it’s very cool) and the first between the two suburbs since Storey Bridge opened 80 years ago. More people wandering through Kangaroo Point and its cafes and bars? Easier access for that suburb’s residents to their workplaces? Overall we’d say there’s strong positives for local property owners when it opens in 2023. Many of the peninsula’s streets are remarkably quiet and it’s hard to see that changing with no cars coming over on this bridge. 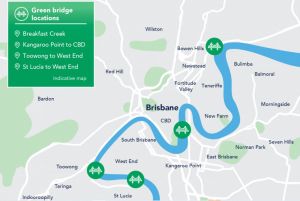 The Breakfast Creek Green Bridge is a smaller and simpler one, but it will help to ‘unlock’ the northern end of Newstead and provide pedestrians and cyclists with an appealing riverside avenue. It’ll also further link Hamilton’s residents with the city.

Victoria Bridge closes to cars from this Sunday as construction ramps up on the Brisbane Metro high frequency transport project. While remaining open to pedestrians and cyclists, there’s no doubt there’ll be greater pressure on the William Jolly, Go-Between (tolled) and Captain Cook (expressway) as motorists re-set their commutes for the new year. There is no other suburb better connected to the CBD over water than South Brisbane however, with the Kurilpa and Goodwill green bridges added to those mentioned above to give us 6 travel options. And that’s before the Neville Bonner bridge is finished late next year, linking the South Bank’s big wheel to Queen’s Wharf.

Now up for community consultation are two new bridges that are causing considerably more discussion! Council’s moving forward with a long anticipated plan to link West End to each of St Lucia and Toowong, opening up the 4101 peninsula to its cross-water neighbours. The Toowong bridge would draw pedestrians and cyclists from near Forbes Street over to the area adjacent to Toowong Village. Council’s considering three options for the St Lucia bridge: Orleigh Park across to Guyatt Park, Ryan Street over to a closer spot to UQ at Munro Street, or Boundary Street to the edge of the UQ campus.

A group of West Enders have already made their dissent well known with the third St Lucia option requiring home resumptions. While option one lands in parkland some locals aren’t happy they’ll lose some of that green space and feel that’s too close to the Toowong bridge to be useful.

There is a history of locals objecting to linking this peninsula to the rest of the city, last seen with protests against the Kurilpa Bridge in 2009 and Hale Street Link (now Go-Between Bridge) before its 2010 construction. We understand there could be some fear of integration with other areas, but these new bridges will allow far greater cycling and foot traffic links throughout inner-Brisbane, especially for the student community of Qld University and its surrounds. It’ll open up the St Lucia peninsula in a similar way to the Eleanor Schonell Bridge when it linked to Dutton Park in 2006 – although this time there won’t be a crossing for buses.

Connecting residents in West End’s southern pocket to the Toowong Village area doesn’t just offer them greater shopping options. Its rail station is a further transport node, while there’s a sizable collection of dining and entertainment amenities. Similarly residents of 4066 will no doubt love the opportunity to stroll over to the Davies Park markets on a Saturday morning, and to wander West End’s many cafes and small businesses. This link will definitely benefit both communities and their ‘walk scores‘ with  greater access to several lifestyle drawcards.

Visit the BCC site to see more on Brisbane’s new bridges. Consultation for the West End bridges is now open until March 31st.