With a Margaret Olley retrospective about to open at our Gallery of Modern Art it is timely reminder that West End, the enclave of Hill End and Highgate Hill, have long attracted those with an interest in the Creative Arts.  Their continuing legacy and the work of today’s West End artists make it the eclectic unique place we love to live in.

Margaret Olley, undeniably one of Australia’s foremost female artists and award winning National Treasure’s connection with the area commenced when as a boarder at Somerville House her artistic talents were identified and nurtured.  Her art teacher, Caroline Barker, encouraged her parents to allow their daughter to study at art college, which she attended firstly in Brisbane and then in Sydney, from where she graduated in 1945.

After playing an active part in the Sydney art scene, in 1949 like many of her contemporaries Margaret left the antipodes to experience the bohemian life in France and develop her craft.  She returned to Brisbane in 1953 after the death of her father, to live with her mother in the family home Farndon, where she remained for ten years. Farndon was located at 15 Morry Street Hill End. 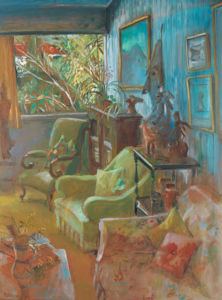 The interior of Fardon: painting by Margaret Olley

The sanctuary of Farndon was undoubtedly an important backdrop for Margaret and a creative influence for her favourite subjects of still-life and interiors.  Sadly, the home was burned down in 1980 and most of those early works were destroyed, but memories of the home and its importance to her formative artistic years will hopefully form part of the GOMA exhibition.

Margaret Olley has been the subject of two Archibald Prize winning portraits, the first, by William Dobell in 1949, which caused some controversy and the other by Ben Quilty in 2011, a close friend and mentee, whose work is showing simultaneously.

We are privileged to know that her enduring artistic legacy began in our backyard of Hill End.