The Hidden History of Highgate Hill

The Hidden History of Highgate Hill

Across inner-Brisbane’s there’s plenty of proud and visible landmarks, but some of its most interesting are hidden away. Throughout the history of Highgate Hill water has always been a valuable commodity, and never more so than in the fledging days of Brisbane’s development.  Because of its topography sitting high on a ridge as its name suggested, getting water to Highgate Hill was a difficult task.  Historians have noted that it was for this reason the expansion into the area was not as rapid as some of the lower lying lands around the colony.

Whereas we may have thought that locating Brisbane on a river was good planning and would have easily provided the water that was needed, that wasn’t the case.  Being so close to the mouth, meant that the water was too salty and not potable.  Residents of Highgate Hill had to rely on water coming across the Old Victoria Bridge in pipes that often needed maintenance or gather water in buckets from a spring that was located where the Boundary Hotel now stands. 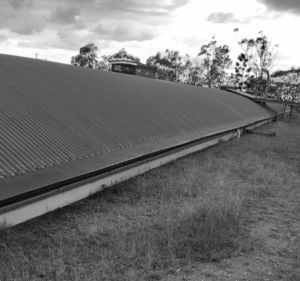 In 1889 that all changed when the Brisbane Board of Waterworks took a bold step and constructed a Reservoir that still stands today.  It was built on the crest on the same elevation as Highgate Hill Park, near the junction of Dornoch Terrace and Gladstone Road.  Its frontage is on Hazelwood Street, where Hazelwood House, home to Justice Edmund Sheppard, Judge of the Supreme Court of Queensland from 1874 to 1882 once stood.

It is said to have held 8.2 million litres of water and was built at a cost of 12,500 pounds which is around 2.8 million dollars in today’s money. A huge investment for the city.

The Highgate Hill Reservoir was a feat of engineering in its day as the water was carried in pipes over 20 kilometres from Gold Creek Dam in Brookfield crossing the Brisbane River at Toowong and up to its collection point in Hazelwood Street.

It is passed by thousands of unsuspecting commuters every day.  The only hint of its significance to the development and history of Highgate Hill are the four curved red iron roofs that pop up above the ground.