The evolution of Brisbane architecture

You are here Home Blog The evolution of Brisbane architecture
Architecture and Renovation, South Brisbane and South Bank

The evolution of Brisbane architecture

This week’s unveiling of the design of South Bank’s new theatre has got us chatting about Brisbane architecture. The Premier says the $150m addition to QPAC will make it the largest performing arts centre in the nation, and could add another 300,000 visitors to the one million plus who attend its shows each year.

It’s a huge boost for the inner-city, a striking design and the new theatre’s glass curtain façade is definitely eye-catching. But given the late Robin Gibson designed the rest of QPAC, along with the Qld Art Gallery and Museum, in his “brutalist” style, we’re most interested in how this sparkling new addition will complement its surrounds. Gibson’s design is typically loved or hated by locals (we’re lovers for the record!) and this prominent corner of the cultural centre is an opportunity to showcase how Brisbane architecture is evolving.

Brisbane’s own Michael Rayner is part of the winning design team of Blight Rayner + Snøhetta and he’s previously had his hand in notable QPAC neighbours such as the Convention Centre and the Kurilpa Bridge. Like Gibson before him, Rayner’s is a name that commands attention in the world of Brisbane architecture. Governments don’t often take risks in public design and he’d be considered a safe set of hands in integrating this final piece of the QPAC puzzle. His design opens part of the building to the street, and he’s quoted saying it will be “engaging the arts with everyday public life, not just relying upon formal theatre performance”. 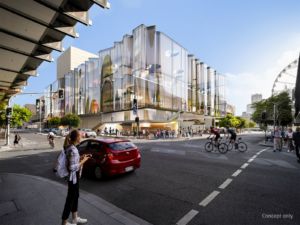 It’s a common criticism of Gibson’s QPAC, that it’s inward focussed and ignores its riverside location. So this new theatre might be a good example of how Brisbane’s buildings – whether public or our own private homes – are becoming more outward looking. More a part of their surrounds.

We see increasing demand from inner-Brisbane home buyers who want to live in interesting neighbourhoods with cafes and bars and people and activity outside. These “third places” (home and work being the others) are part of a more blended lifestyle where we’d say the home’s design is still important to us, but our location is more and more a deciding factor. A blurring of time spent at home and in its immediate area. So will the architecture of our homes continue to open us up even more to the outside world?

Where privacy allows (and we’d suggest Brisbanites are becoming more relaxed about privacy) this city’s modern homes are definitely more open. They increasingly feature large expanses of glass that slide away, an emphasis on cross ventilation, and indistinguishable lines between living and outdoor spaces. Bathrooms exposed to private gardens. Glass replacing solid balustrading.

It’s a stretch to find too much meaning in this one design of the new theatre. And the monolithic nature of the current QPAC was hardly representative of broader Brisbane architecture of its time. But there’s a nice example in it, and we do like where this city’s leading architects are taking us.

Please share your comments on the evolving Brisbane architecture!