Many of us will remember the heyday of off-the-plan sales that occurred in Brisbane during the 1990’s.  At the time we thought that this was a new and innovative marketing strategy, but as is often said – everything old is new again. In fact, the first large scale off-the-plan unit sale in Brisbane, was conducted in the 1950’s when the sale of the iconic Torbreck apartments was launched to the public by builder Noel Kratzmann and selling agents Torbreck Real Estate Brokers.  They were selling the dream of the American lifestyle that was spreading to Australia through Hollywood and popular culture. A ‘new concept of modern living’ so the marketing promoted.

Perched on the crest of the hill in Dornoch Terrace, Highgate Hill, Torbreck was situated in one and a half acres of landscaped grounds incorporating a free form pool and private dressing sheds. The marketing material boasted of a roof top sun deck and observation lounge and an exclusive ground floor retail complex, including restaurant, pharmacy, hairdresser and beauty salon. Room service from the bar and restaurant was to be offered to all owners.  Sadly, this part of the project never eventuated but it was an innovative concept that wasn’t to be repeated by developers until many decades later. 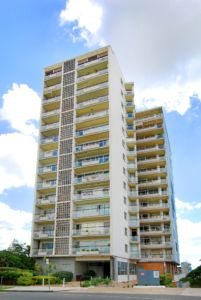 Like our current pre-sale off the plan agreements where developers need to achieve a certain number of sales to obtain finance before starting to build, the units which were sold as Company Title, required Share Applications to reach 600,000 prior to commencement. This guaranteed the funds of £600,000 needed to ensure completion (around $19,000,000 in today’s money).

The concept, construction and marketing resulted in a flurry of interest and the majority of the 147 apartments were sold off-the-plan.

Please share your stories of the Torbreck Apartments. Have you owned or lived in the building?!