It’s not just Melbourne that can lay claim to the laneway. In the inner-Brisbane enclave of Highgate Hill, renowned for its steep streets that fall away from the main arterial of Dornoch Terrace to the banks of the Brisbane River, there are hidden pedestrian access points that mostly only locals know.

In 2012 the Brisbane City Council began a campaign to change the nameless pathways to area specific reminders of the heritage and geography of the area. 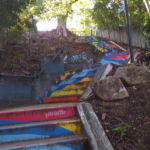 You would be forgiven for thinking War Gun Lane that runs between St James Street and Monto Street immortalises a distant battle.  Not so. It is a reference to the first inhabitants of the area and the anglicisation of their word for Bush Turkey – Woogoon.  Local artists have interrupted the steep steps that form this path with art works to make it less of a challenge and a pleasure to climb.

Assisi Walkway runs parallel to St Francis of Assisi Church between Dornoch Terrace and Gray Road.  It puts into historical context the expansionist vision of Catholic Archbishop Duhig.  The modest timber Church built in 1923 was relocated to its current position from the opposite side of Dornoch Terrace in 1926.  The new location formed part of an 8-acre estate running from the terrace down to the river.  The area at the time was home to the working class and it is likely that the lane began as a well-worn path bringing the faithful to mass on Sunday.

Another lane in close proximity to St Francis of Assisi Church is Bell Path.  Running behind the Kurilpa Community Child Care Centre between Gray Road and Barnsley Street, the church reference is merely coincidental.  It is named in memory of a long-standing resident, who was one of the first landowners in nearby Daventry Street.

Rosecliffe Street because of its topography is a narrow no through road used mostly by residents, but for those exploring the area on foot, at 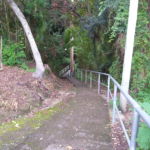 one end of the dead end is a path that runs through land that Brisbane forgot over a gully of dense rain forest to High Street.  You could easily imagine you are in the Brisbane of our founders as you walk this nameless laneway.  On the other end another unnamed path snakes its way for only a few metres through a well landscaped chicane to join Chester Street.

The demographic and style of the suburb is continually changing and a more recent pathway in the newly developed end of Brydon Street is yet to be named.  It takes locals from one side of Brydon Street past the pretty Brydon Park to Derby Street and on the other side between the newly built homes up a steep pathway to Dornoch Terrace.

It is not until you shed the comfort of the airconditioned vehicle that you can truly appreciate this wonderful area that is so close to the buzz of the city and main arterials but at times as remote as the Brisbane  the first Australians and Men and Women of our colonial past knew.