You are here Home Blog A hidden gem of Milton’s history!
Milton

Hidden away behind the iconic XXXX brewery and bounded by busy Milton and Baroona Roads in Milton, sits the magnificent Old Bishopsbourne.  Originally built in 1868 for the first Anglican Bishop of Brisbane Edward Tufnell, it remained the home of the upper echelons of the Anglican church to the mid 1960’s when they relocated to Eldernell at Hamilton.

Thankfully the home and grounds, didn’t fall into the hands of developers and remains high on the crest, in its mostly original glory forming part of St Francis Theological College, that has operated there for over 75 years. The historical significance of the home and its place in the religious history of Brisbane was recognised in 1992 when Old Bishopsbourne was entered on the State Heritage Register, so it is now protected for future generations to appreciate.

The home is constructed of local sandstone and porphyry with slate hipped roof topped with four tall chimney-stacks and cloistered arches forming its exterior arcades that no doubt would have provided much needed shade for its residents in the heat of Brisbane summers. Intricate cast iron balustrades in the shape of inverted arches enclose the balconies. Old Bishopsbourne sits proudly in treed grounds of almost 4 hectares, that at the time of construction would have overlooked Brisbane from on high and been seen from afar.

Residents who have lived in this inner-city locality for decades are always amazed when they discover such a home of historical significance has been in their midst for all these years. 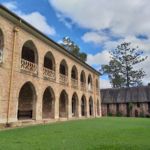 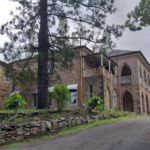