You are here Home Blog Is this the bottom of the Brisbane apartment market?
Brisbane's sales market, trends in Brisbane property

bottom: noun  “the lowest point or part of something”

Property watchers are keenly following the Brisbane apartment market, the recent easing of new supply and improving inner-Brisbane vacancy rates, anxious to pronounce a low point in prices. To property buyers, and especially investors, this is real estate nirvana. The magical moment when you buy into the market by paying the least, ready for maximum capital gains. (Cue back patting from envious friends, encouraging comments from in-laws and bank managers, and a golden path to financial security!)

So are we there yet?! Rather than give you the random ramblings of our real estate agents, we asked three of Brisbane’s most respected market analysts to share their insights with our readers.

“Recently we have seen Brisbane unit values starting to edge higher, breaking a long run of declining values.  On an annual basis, Brisbane unit values were falling between July 2016 and May 2018, with the annual rate of growth moving back into positive territory since June of this year.” So says Tim Lawless, Research Director Asia Pacific for property data giants Core Logic, whose team measure price movements as a science.

Tim sees Brisbane’s unit market as a “solid buying opportunity”, with prices so far below their peak. “Values remain 10.8% lower than their historic high”. He says investors will find our higher yields and potential capital gains an incentive to buy again. “Add to this the improving rate of interstate migration and sheer affordability of Brisbane housing prices relative to Sydney and Melbourne, and the growth prospects are starting to look better.”

He also expects apartments to attract buyers taking their first step into the market. “Units values are roughly $155,000 lower than house values (median value $382,600) which is likely to be appealing to first home buyers and younger couples who want to live close to the major working nodes and transport options.”

Herron Todd White is one of Australia’s largest valuation firms and Brisbane Managing Director Gavin Hulcombe has been working in our apartment market for more than two decades. He says “Many of the buildings presold during the peak of 2015/2016, have now been delivered with the number of units still to complete declining. It is hard to call the bottom of any market, but there are local buyers re-entering at the adjusted prices now being offered for these units.” 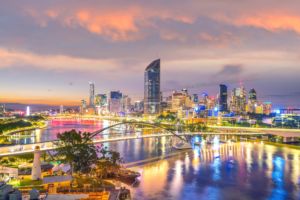 Gavin says the oversupply is being felt across the market, however “those that cater for the local owner-occupier market have been more resilient in a slowing market, particularly in contrast to those buildings which have largely targeted to the interstate and overseas investor.”

The Real Estate Institute of Queensland CEO is Antonia Mercorella and she says inner city apartments “will remain a challenged sales environment for the immediate short term”, while excess supply is likely to be absorbed over the short to medium term. “In essence, while prices are low now, they are unlikely to remain this good for long. Investors are advised to get in quick.”

Antonia says southerners continue to chase the “unbeatable value proposition of Brisbane real estate” and she points to several major projects such as Queen’s Wharf, Cross River Rail and Brisbane Live, turning our city into an exciting destination. “Demand will rise significantly for inner city apartments.”

Please share your comments! Has the Brisbane apartment market bottomed? We’d love to hear your insights!

Can we help with your Brisbane apartment? Here’s all the details of our Brisbane property management service and our real estate sales team!