Inner-Brisbane apartments – what happens in 2018?!

Inner-Brisbane apartments – what happens in 2018?!

Somewhere out in Brisbane’s suburbs there’s a huge industrial yard full of disassembled tower cranes. Once reaching high and proud over our inner-city’s shiny new apartment buildings but now disembodied, laying prone in the dust. Waiting until they’re next needed. And many of us hope they rot and rust for some time to come! We’ve simply had too many apartments built and it’s been pleasing to see construction slowing and, more importantly, many approved projects not proceeding.

So what of 2018 and the inner-Brisbane apartment market? Will tenant demand catch up to or even overtake rental supply? Have sale prices bottomed? We’ve put together some of the relevant info to help you make up your own mind!

An extra 10,513 homes were added to Brisbane’s rental supply during 2017, a jump of 7%. The supply in the 21 suburbs closest to the CBD (what the RTA call “city inner”) grew 11% and they’re now home to a quarter of our city’s rental dwellings. The graph shows the sharp upturn as new projects came online, the majority rented to tenants. And the keen stats watchers and optimists will note the slight change in the past 3 quarters, as the pace of growth has eased. It might be like Noah saying the rain’s a bit lighter, but construction has slowed and there are a lot less new apartments due for completion during 2018. 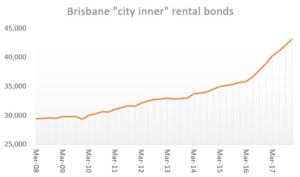 With so much on offer for tenants it’s no surprise inner-city median rents are flat, now at $480 per week for a 2 bed apartment. Rents first hit that mark in 2012, (they peaked at $495 in 2015), so it’s been a long wait for local investors wanting rent rises. Interestingly rents for the greater Brisbane city and for houses have also gone nowhere in 5 years. Many of the residents in these new apartments have moved from houses in the burbs, trading a yard and mind-numbing commute for life in the city at an affordable price.

Our General Manager Clint says turnover of existing tenancies is notably lower, with many tenants staying put. “Lease renewals aren’t generally leading to higher rents, but we don’t see many dropping either. I’m sure many tenants are looking at their options and realising they’re okay where they are, and especially if their landlord is looking after the home. Most people won’t pack and up move for a small saving, so where landlords are near fair market value they’re keeping the property rented.”

Our leasing team are getting very strong tenant enquiry (553 calls and emails in the past 7 days alone!) and, when the rent is reasonable, we’re actually getting properties rented quite quickly. One new apartment now has 54 tenants registered and wanting to view as soon as it’s completed in a week’s time. The location, views and amenity have generated a flurry of activity. The other side of this: the development has 486 apartments and the vast majority will be offered for rent!

New data from CoreLogic says Brisbane’s apartment prices slipped 1.2% in 2017. Our sales team have just experienced their busiest quarter since 2015 and Sales Manager Rebecca says there’s a more “business as usual” approach from buyers. “There used to be regular comments that they were looking but not buying, waiting for prices to fall further. But we’re not hearing that much anymore, people are getting on with finding their first homes or upgrading. Life goes on and buyers have much more confidence in the market.” 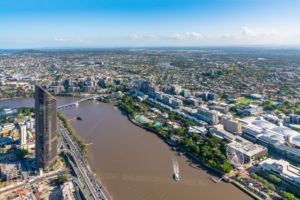 Rebecca also says we haven’t witnessed any forced sales for some time. “We know many buyers of brand new apartments are getting valuations well below their contract prices from 2 or more years ago. It’s really disappointing for them and some do call us wanting to on-sell. But the vast majority seem okay to settle on them, ride out the market and don’t have pressure to sell.”

It’s unlikely anyone has a complete grasp on the total number of new projects still under construction, but it’s the development “hotspots” of Newstead, Woolloongabba, West End and South Brisbane that will deliver new apartments in 2018 and 2019. The notable trend in these ‘late market’ projects is larger apartments aimed at the sizable number of Brisbane empty-nesters. Many developers will be counting on them swapping their too-big houses spare bedrooms and gardens for a lower maintenance home, and no-one argues this is a trend that’s barely begun in our city.

Plenty of property experts have made their forecasts on inner-Brisbane’s apartment market for 2018, but we’d love to hear your thoughts. None of us will truly know the turn in the market until it’s passed, but is this it? Will rents and prices rise as those cranes fall? Or will 2018 come and go with lower prices and rents?