If you own real estate in Brisbane’s inner city, this is one project that is going to have an impact on you. In what’s been termed “the largest single development application in Queensland’s history”, Queens Wharf’s plans were last week lodged for approval and a public consultation period will soon follow. The scale is enormous – $3 billion and approx 10% of our CBD’s land area – the largest private sector development in our state. So, like it or not, inner-Brisbane real estate will change as a result.

Yes there will be construction noise and dust and traffic headaches that have already started and won’t finish until around 2024. It has a casino at its core, often an unpopular item with locals. And they’ll add another 2000 new apartments to a market that’s already got quite enough for the time being thanks all the same.

But there’s so much for inner-Brisbane property owners to like about this project. At a time when our residents – owners and tenants alike – are putting increasing value on living near places they can go when they’re not at work, this is one very attractive and enormous precinct. For me one of the main appeals is the way the development will re-engage Brisbane with some of our most valuable history. Unlocking several character-filled buildings from the 1800’s, reinvigorating and immersing them into today’s city life with modern uses. The current casino moved to free up the stunning Treasury building for retail. Blurring with riverside walkways, bars and eateries – think The Rocks in Sydney. A real destination. 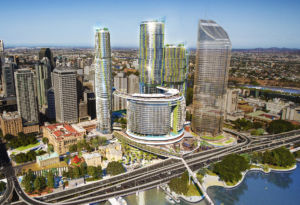 The Sky Deck is the centrepiece of the project’s imagery so far, perched 100m high it’s got clear parallels with Singapore’s Marina Bay Sands. Along with 1100 hotel rooms this will be a tourism icon that will help Queens Wharf attract an extra 1.39 million tourists to our city each year. A $1.69 billion increase in tourism spending for our state. The casino has been the focus of public concern, but if you’ve visited Marina Bay Sands their casino is tucked away, dwarfed by the shops and activity of a bustling and vibrant entertainment precinct. At Queens Wharf the casino will be around 5% of the built area so a similar outcome seems likely. (And the government’s undertaken to not allow another casino in Brisbane for 25 years.)

There’ll be lots and lots of public open space to connect the CBD with the river, bringing life to that neglected space under the Riverside Expressway and mirroring the waterfront activity of South Bank, (Queens Wharf is actually bigger than South Bank – its 27 hectares adding to the 17 hectares on the southern side of the river). A new pedestrian bridge will link it to South Bank, right in front of The Wheel,  connecting both sides of the river with the Botanic Gardens and parliamentary precinct back to Queen Street. Combined they offer lots and lots of boardwalks, parkland and places to get outside.

There’s elements of lots of famous public spaces from around the world, but for us there is an exciting shape of an emerging Brisbane in the approach. It embraces the outdoor lifestyle we treasure so much – on the Sky Deck and at the ground, and integrates important history of its neighbourhood. It will be a place to bring residents and tourists together, and provide a focal point for visitors to our city.

With 8000 jobs on completion we’re told Queen’s Wharf will boost Queensland’s Gross State Product by $4 billion. It makes sense the ASX-listed Star Entertainment have partnered with Asian developers as our city moves closer to Asia every year. And this is a project of international scale and appeal.

If you can spare the 21 minutes this video on Queens Wharf is well worthwhile. Or try the quick fly-around for a sense of the scale and architecture. And we’d love to hear your thoughts on the project and its impact on inner-Brisbane real estate.