Brisbane is changing. There really is a far more international flavour to our city in recent years and the pace of change is ramping up incredibly fast.  When the marketing gurus launched the “New World City” campaign in 2009 the cynics were quick to shoot it down. ‘Unachievable and naive’, was the criticism. Brisbane’s still a big country town. Isn’t it?

We attended a meeting last week where Lord Mayor Graham Quirk announced that international tourist numbers to our city are up 11% over the past year. Double digit growth. Tourism is now firmly Brisbane’s largest export industry (worth over $5.5 billion per year) and those red double-decker buses running around our streets are just one obvious clue of the change. New direct flights from Asian cities especially are delivering big financial dividends for Brisbane.

Our city’s second largest export, education, is also growing. And growing rapidly. Already we’re home to more than 75,000 international students that Council says support 20,000 local jobs. And BCC’s temporary incentives to developers to create new student accommodation is encouraging new activity. Developers have been quick to respond to the discount on infrastructure charges in places like South Brisbane for example. There’s 1,870 new rooms under construction right now in two purpose built student accommodation facilities in this suburb. Developers BlueSky and UniLodge are well advanced on construction in the Merivale and Vulture Street projects and they’ll both open in 2017. 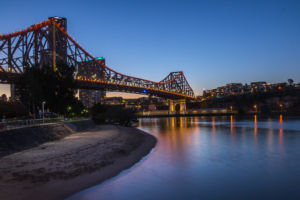 When Urbanest’s South Bank accommodation opened in 2010 it introduced 713 extra rooms to the local rental supply. By far the largest residential building at the time. But the latest flurry of construction is adding big numbers of dedicated student accommodation. One of the Council’s aims with the incentive was to encourage conversion of the estimated 300,000m2 of redundant commercial stock in the city. Last month saw the opening of the innovative Student One building in Adelaide Street, the 687 student residents moving into the converted office tower originally built in 1985. Another new CBD student building opened in April (“Iglu” in Mary Street with 414 students) and there’s two others already underway in Wharf Street (“El Camino”, a 41 storey student tower with 753 rooms) and Elizabeth Street (with 1000 rooms).

On our count that’s around 4,700 dedicated student rooms that are being added to our city’s appeal for the education export market. These are purpose built facilities with recreational, study and communal areas, and central locations right near the major Uni and TAFE campuses. They have very few carparks (sometimes less than 20 for 1000 rooms) so they’re intended for residents who want to stay close to their home and study – not ideal for many Brisbane tenants but perfect for international students. Our city’s seen as safe and accessible, our education is well-recognised internationally and having further niche accommodation options will open Brisbane’s door wider to this huge international marketplace.

It’s a fascinating time to live in Brisbane’s inner city.