Going green might soon be more common in our inner-cities with the economic benefits of solar photovoltaic (PV) systems no longer limited to houses in the ‘burbs. Innovation and new technology is helping more new developments harness the sun, and as public awareness grows we’re

Russ Holmes of Local Power is a Brisbane consultant working on local apartment buildings. He says many body corps are considering how to install solar power. The simplest option is to install a shared roof-top installations, where the solar system is run by the strata manager. The challenge is administering the use and on-charging tenants. The alternative is a relatively new option to put the infrastructure on the roof and while the roof itself remains body corp common property, the panels are owned by and benefit each apartment directly.

Russ says one Perth project recently completed with 86 apartments each having a 2kw panel on the building roof. While all the hardware is up high, each system is physically wired down to each apartment. The average energy consumption of a 1 bed apartment was cut in half, in combination with other efficiency measures. 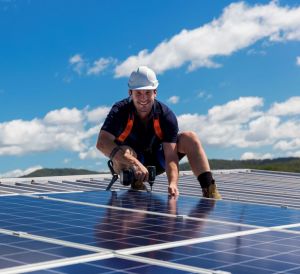 “On a smaller scale, we’ve been working with the residents of “Garrison 14″ in the Brisbane suburb of Annerley and have been successful in designing a solution to suit specific owners. Multiple installations provide cost advantages that can be passed through to owners and in this case cabling access could be achieved.”

Russ says developers would do well to plan solar power early and take advantage of the new technologies in their designs. “We’re receiving increasing enquiries from individual unit owners looking to generate their own electricity however most on closer investigation are challenging due to logistical access of electrical switch boards and roof area. If they were integrated at the development stage, they could not only be possible but cheaper for the unit owner.”

The RTA says owners can on-charge for the power use. “The RTA strongly recommends the property manager/owner and the tenant negotiate at the start of the tenancy how the electricity will be charged when a rental property has solar power.”